On Wednesday we went to a local school to teach 11-12 year olds about turtles and their own local environment. The school was really small and classrooms were separated by flimsy screens that acted as whiteboards and chalkboards. My project supervisor gave the kids a small presentation on Ocean Spirits and what we do. And then explained a little about the species of turtles that are found on their island.

After this I gave all the students the letters and pictures my mom’s class had colored and wrote them. They read a few of them out loud and I explained what my mom was teaching her students and why.

We then took them outside and played a trivia game that had questions from the powerpoint on it and afterwards they all got some American candy, courtesy of my mom’s students, as well. Later that night we went to a neighboring town and watched the cricket matches. I do not really know what is going on during it, but there are a lot of dogs around that I can pet and play with that so that is mainly why I go. There are A LOT of strays here. All the dogs look almost exactly the same, just different colors. In this town though, some vet students came and gave them all flea and tick collars and let people come take their dogs for rabies vaccines and other shots. So some people try to help, but there is still a lot of fighting and inbreeding and homeless dogs. Animals in general are just rarely well taken care of. Goats and cows will be tied up in the same area all day with no shade, no water, and only eat what they can scavenge up. Goats and cows are worth a lot of money though, so people are a lot nicer to them then they are the dogs. It is definitely something that I am having to get used too.

Twice a week we do a morning survey of Bathway Beach, the local public beach. We head down there around 5:30 a.m. and bring two rakes. This survey is not as intensive as the night survey on Levera. We walk the length of the beach looking for tracks and if we see any we just rake it out and tell the supervisors at the house. It is pretty simple and aside from the long walk down and the long walk back up to the house, really relaxing because you just get to walk a beach. Only a small part of Bathway is used for swimming because there is an artificial reef that blocks most of the bigger waves and protects swimmers from the strong current.

This is the beginning of the beach and not many people utilize this end at all. Even in the picture you can see all the trash that washed ashore. Walking the whole length of the beach is very disheartening because there is just so much trash.

This is the other end of the beach that also doesn’t get used very much. This part of the beach had a lot of sargassum seaweed. Sargassum is a brown ugly seaweed that just covers beaches. I am told that it even smells sometimes when there is a lot, but I have not smelt it yet. 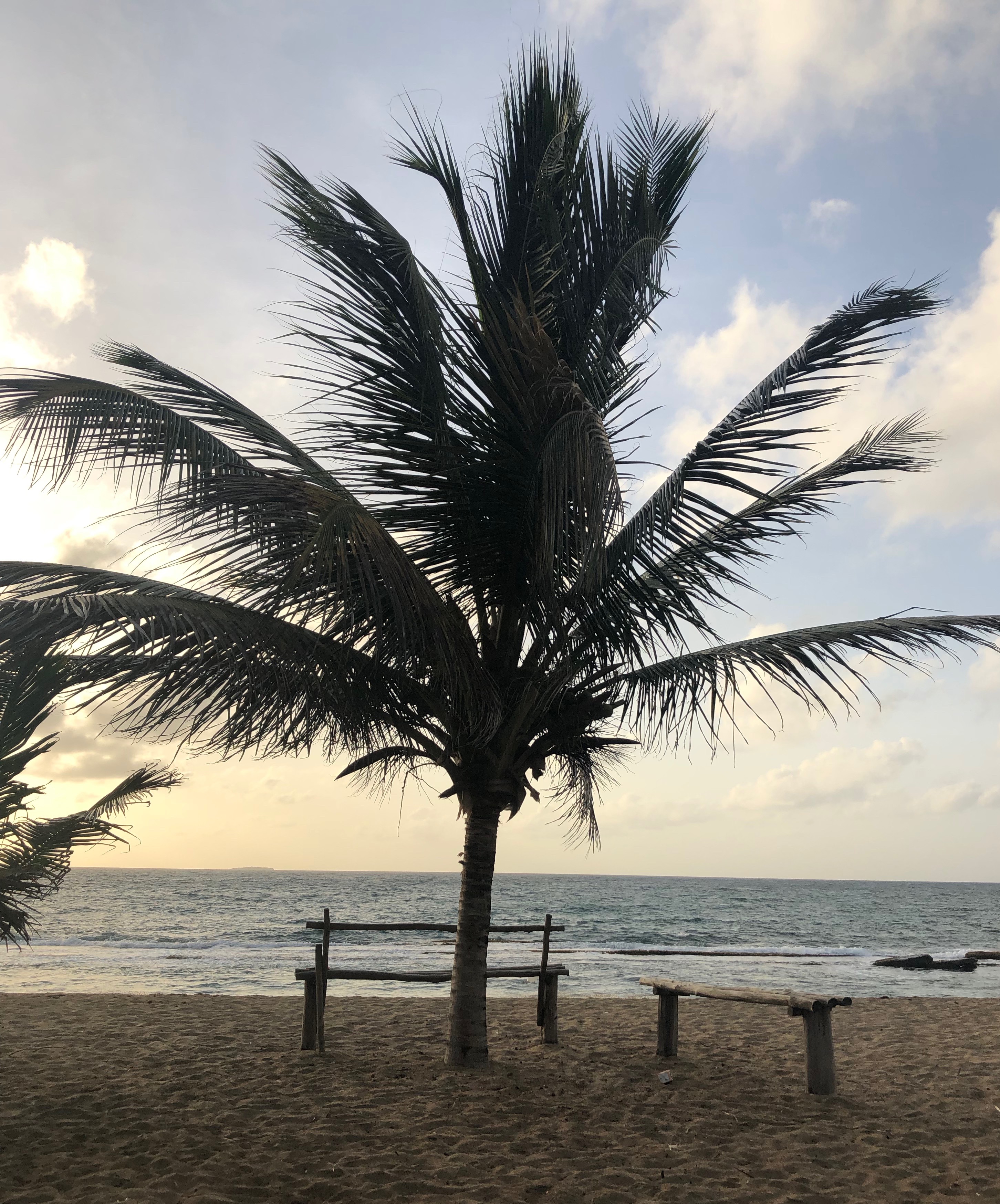 The part of the beach where you swim is very pretty though, (as they usually are the better kept areas) with little seaweed because of the artificial reef. It has some umbrellas set up and a beach bar and a little place with a few places to get some local food.

I have yet to see any hatchlings yet on my night survey, but I do have a picture of a dead one to show so far. This hatchling came out after the sun was already up so the researcher who saw it, but it in a bucket with sand to take home so we could release it at night, but the turtle did not make it through the day. It was already too cooked. Hatchlings need to hatch at night or else the hot sand and sun will literally cook them alive. 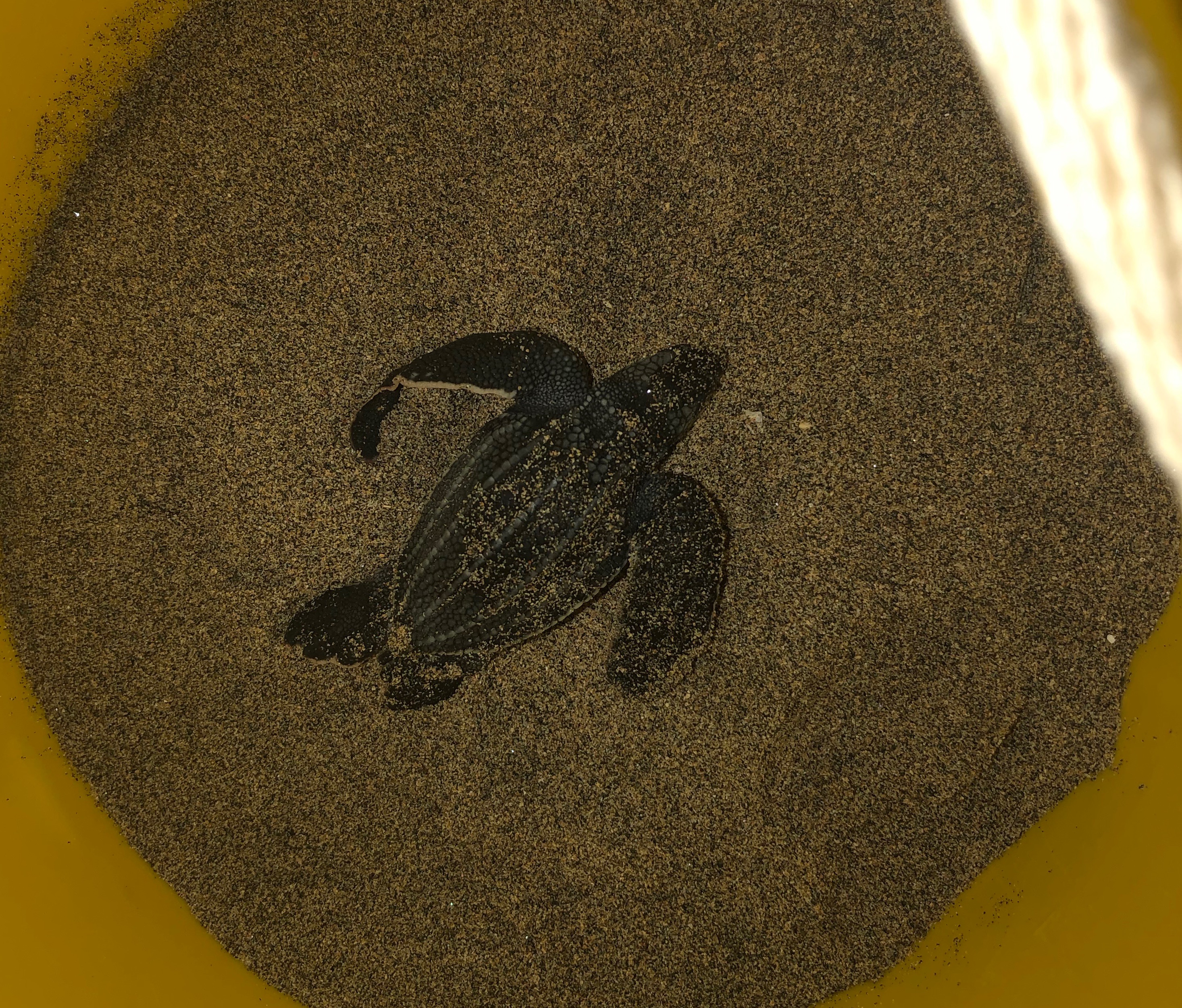 Also as a tip, if you ever see baby turtles at night, do not use artificial light because you confuse them. Red is the least bothering of lights to turtles, they can still see it, but it is not as bothersome to them as bright white light. Also, let the baby make the trip to the sea. If you pick it up and bring it straight in, it will either drown, or never imprint on the beach it was born, so when it comes time for nesting season, they will have no idea where to go back too. The turtles can drown because the trip across the sand gives them a chance to stretch out their muscles and their lungs and gives them enough movement to be able to handle 2-3 day trip out to open ocean.

My last picture is of an adult female digging her nest with her two back flippers. This picture does not even do justice the huge size of these animals. I have only done two night surveys so far and I have only seen 3 turtles personally which is really unfortunate. This is peak laying season, and the amount of turtles coming every night is decreasing rather than increasing which is really scary. However, I go out again tonight, so hopefully I will see some turtles and maybe even some hatchlings.

View all posts by apost10